The Researchers associated in the Group Study in Events and Mega Events of the School of Physical Education and Sports of the Federal University of Rio de Janeiro participated in last February 21st in the Congress of Students and Brazilian Researchers Association in the UK, which took place at Imperial College, London. Andressa Guimarães, Deborah Guerra and Thiago Melo presented the research that they are developing in partnership with Dr Leonardo Mataruna through the carnival project at the Coventry University, also in the UK. 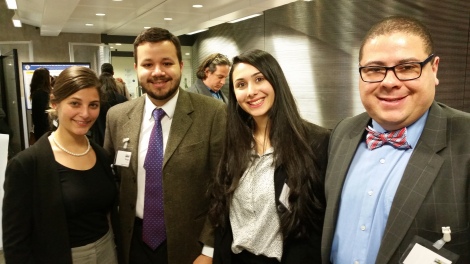 Andressa’s research analyzes in five Brazilian newspapers the relationship of the concept of Peace with the sport mega-events in Brazil. The work analyzes the discourse and iconographic content in the media, in order to verify that relationship.

Debora Guerra presented the results of the study that developed around Canary Wharf, East London. The purpose of this study is to verify the possible legacy of the Olympic Games in the urban regeneration of this area.

Not only have Debora presented research results, but also Thiago. His work analyzes the construction of discourse “Sport-For-Development” in cyberspace, from the case study of the Olympic city page, updated by the Mayor of Rio de Janeiro.

The research carried out on Carnival project will be published soon in a collection on the sports mega-events.